Coca-Cola has long been one of the world’s most valuable brands. And it’s no accident, but the result of decades of quality work not only on the business side, but especially in marketing. Naturally, this also affects investments – in 2015, investments totalled 4 billion dollars. Whether or not you enjoy this beverage, you must admit that world-class marketing is what makes Coca-Cola the world leader in creative communication.

Coca-Cola was invented in Atlanta by the American pharmacist John Stith Pemberton. He was inspired by the Vin Mariani brand of coca wine, which was a combination of wine and cocaine.  But Pemberton needed to come up with a non-alcoholic version of the beverage because at the time Georgia was under Prohibition. Coca-Cola was originally sold as a medicine for various aches and pains, and even as a cure for impotence. It was first served on 8 May 1886 at Jacobs’ Pharmacy. It’s no secret that the original Coca-Cola recipe included coca leaves from South America; in fact, one bottle contained 9 milligrams of cocaine. Coca leaves are still used in the production process today, but they are stripped of cocaine content on a molecular level.

The uniqueness of the Coca-Cola brand has been under construction since its very beginnings. The typeface used in the logo was invented in 1885 by Frank Mason Robinson, from whom Pemberton purchased books. Apart from the legendary typeface, the bottle is also an inseparable part of the brand’s image. It was designed in 1915 by Earl R. Dean and is referred to as the hobble-skirt design. In 2015, the bottle celebrated its 100th birthday, in commemoration of which Coca-Cola launched a campaign in 130 countries around the world called “I’ve Kissed…”. It tells the history of the bottle as a series of kisses through which we can all “kiss happiness” just by drinking from the bottle. 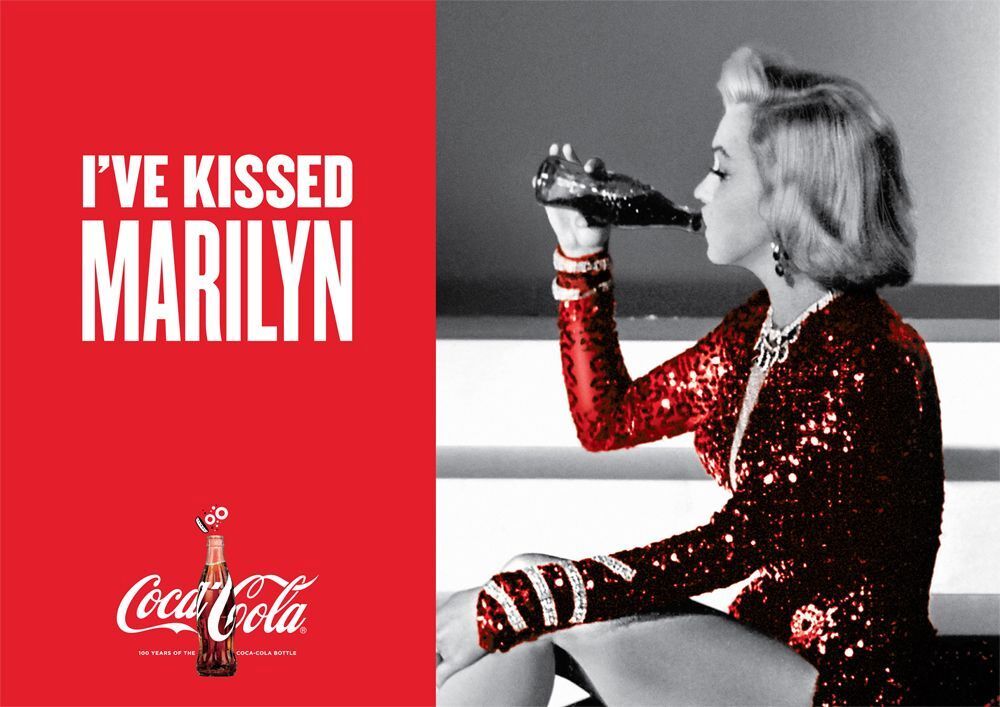 Despite criticism of the brand regarding the negative health effects of consuming too much sugar and caffeine, it cannot be denied that Coca-Cola has enormous influence on American and world culture. Even if we just take the fact that Santa Claus as we know him today was inspired by the jolly old man the company began using in its advertising in the 1930s. Likewise the song Wonderful Dream (Holidays are Coming) by artist Melanie Thornton that was used in the Christmas commercials has become a popular Christmas melody.

One of Coca-Cola’s most powerful marketing activities was carried out in March 2013 in Pakistan and India – countries that have long had conflicts and strife between them. Two special vending machines with giant screens were placed in Delhi, India and Lahore, Pakistan. Inside they contained a camera and projector. The projectors fed pictures from the camera located in the second location, with the screen inviting passersby to: “Make a friend in India” and “Make a friend in Pakistan”. People could see their new friend on the screen, wave to them, and even touch hands on the same point on the screen. If they did this, and created a new friendship, they got the beverage for free. This kind of guerrilla was intended to show that the moment of happiness felt by people when they touch could unit the world.

The fact that Coca-Cola doesn’t only think about profits, but also wants to do its part and use its imagination to make the world a better place for us all, is another reason why we can call it a Lovemark.

Light, Zero, Life or Classic. Today there are several variations of Coca-Cola on the market. Until the end of last year, every variation had its own advertising and its own communication strategy. In 2016, Coca-Cola decided to unify communication of its brand. A single marketing strategy was created and presented by the company’s chief marketing officer Marcos de Quinto at the beginning of the year in Paris. 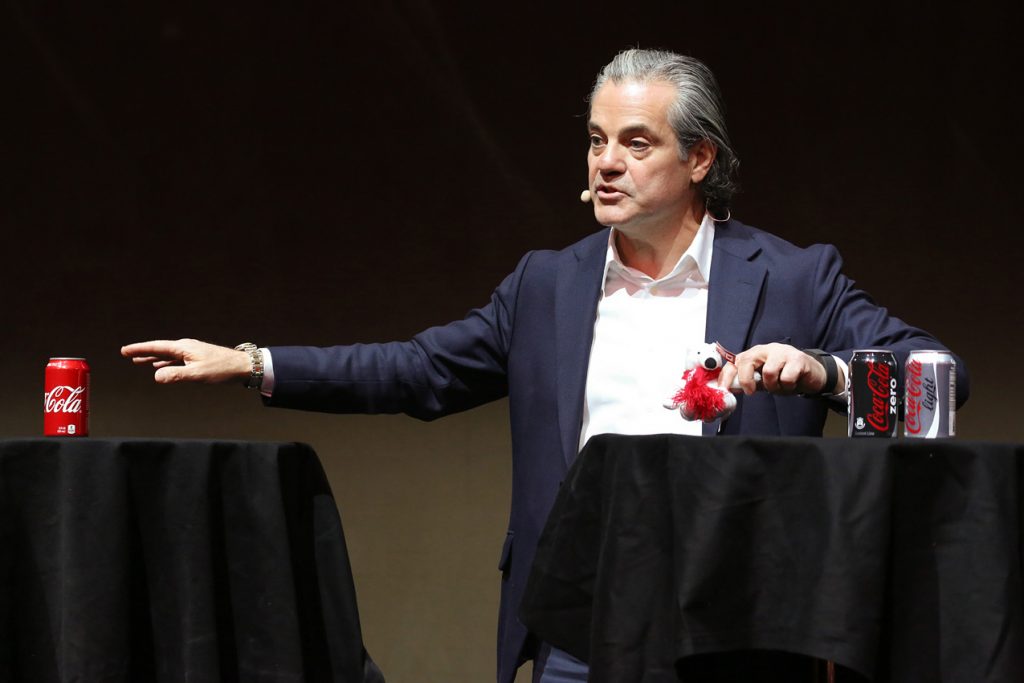 The global campaign entitled Taste the Feeling presents the idea that drinking any variety of Coca-Cola is enjoyment that makes everyday moments special. 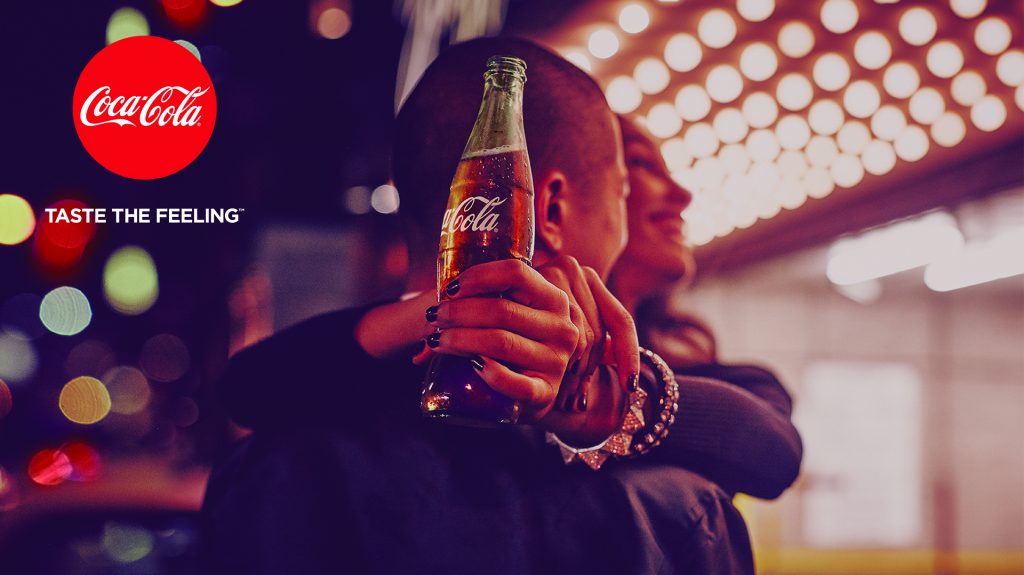 You can watch all the spots on the Coca-Cola YouTube channel.

The global anthem Taste the Feeling is new too. It was produced by Avicii and features folk singer Conrad Sewell. Versions were also created for EUFA EURO 2016 and for the Rio 2016 Olympic Games.

Emotions are key to success

Coca-Cola has long served as an example for all brands when it comes to emotions. Because it prefers to communicate the emotions associated with the product and not the product itself, the company is guaranteed to grow even at a time when a battle is being waged against unhealthy products – and the company’s products are considered unhealthy.

We’ve all had the irresistible craving for an icy cold bottle of the drink just from watching the commercial. Right at that moment, you just want to experience the same good feelings and satisfying emotions.

Building a Lovemark is a long-term process, not a matter of a single campaign. Coca-Cola can be an inspiration for us. We can help you take the first step toward creating a brand your customers will love.

A cookie is a short text that spreads a file of a visited website to a browser. Cookies are important. Without them, browsing the web would be more difficult. Cookies do not in any way provide us with access to your computer or known information that you wish to request from us. It allows websites to remember information about your visit, such as storing your SafeSearch preferences, selecting relevant ads, tracking the number of visitors to a site, making it easier to sign up for new services, and protecting your data. This can make the next page easier and more productive.

Strictly Necessary Cookie should be enabled at all times so that we can save your preferences for cookie settings.

This website uses Google Analytics to collect anonymous information such as the number of visitors to the site, and the most popular pages.