How was the Cannes Lions, the biggest advertising festival in the world?

The week of the best advertising works from all over the world, two days dedicated to a competition Young Lions, inspiring lectures of world-known creators and brands, an indescribable creative atmosphere… this all is connected with sunny Cannes, where we returned from a few days ago.

As movies have the Oscars, so the advertisements have the Cannes Lions. Hence, it is said so and I believe it after week spent on 64th year. The days full of lectures, workshops and discussions with the biggest names of advertising, marketing, but also of show-business world were shifted by prize awarding for the best works in the different categories. What impressions did you take away of it all?

As you probably know from our networks we got to the Cannes thanks to win in the national round of young creator competition up to 30 years in category Design. Together with another 6 winning couples we decided to represent Slovakia.

The assignment in our category was to create the visual path that would unify the communication of organization UN Women. It is a part of UN and it is dedicated to the equalization of women and men in society.

The way we „struggled with“ the assignment, we also said in a brief interview for Strategies. We show you, as the first, our final output. 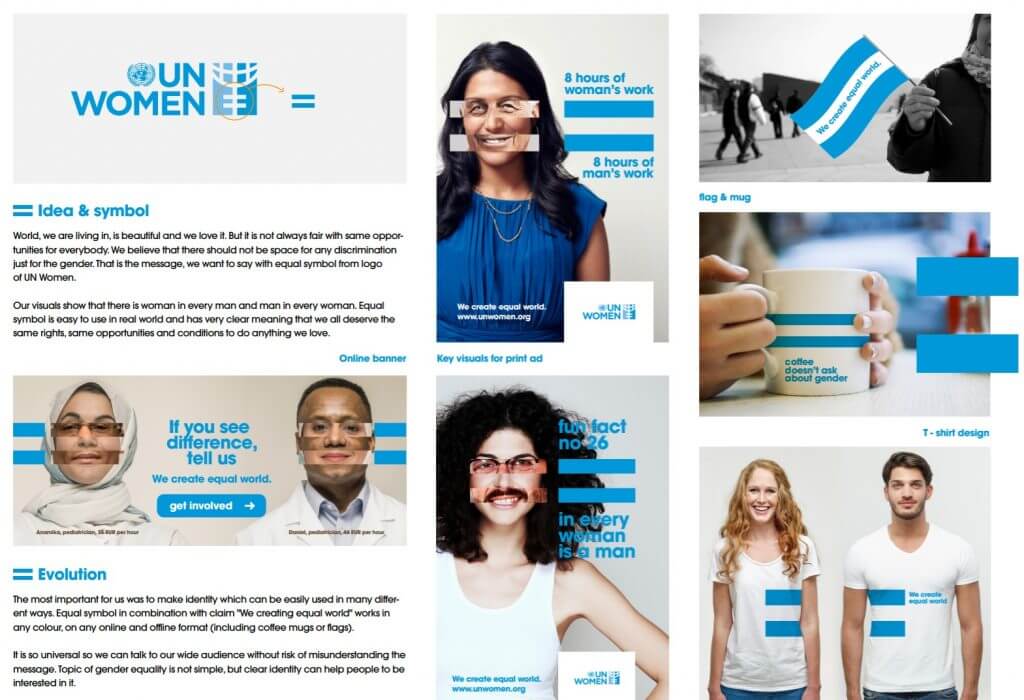 For elaboration we had 12 hours of net time, it took 30 hours from the brief to submission (but we had to also sleep. :)) You probably know that we unfortunately have not won any of the three awarded places. However, our Slovak colleagues succeed in category Movie, to whom we congratulate once again. 🙂 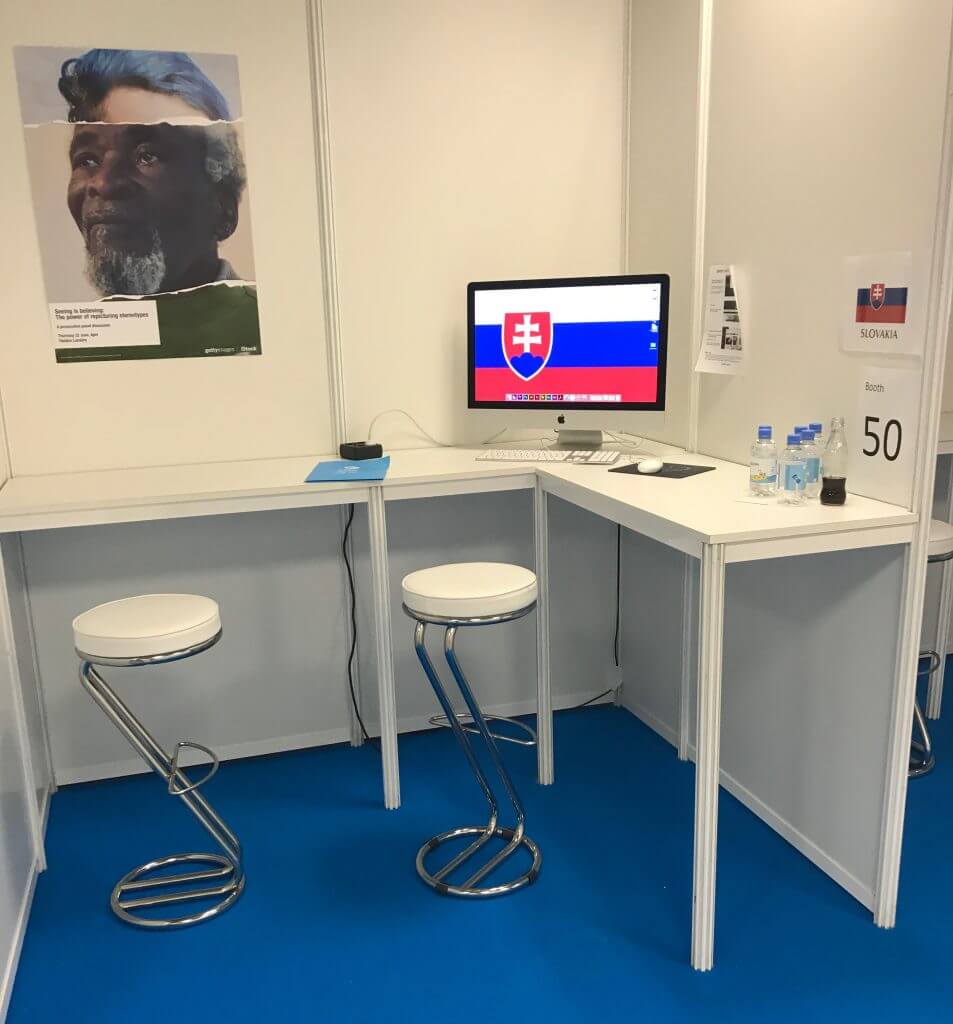 This is how the area for the competitive Young Lions looked like.  Small booth, country by country.  People were moving everywhere, so we did not have a peace for work.  Relatively noisy workshops took place behind our backs. We could leave the areas for competition whenever, e.g. due to lunch or brainstorming at the beach. The only important thing was to submit the final output in time.

On Monday after work submission we could fully dedicate to festival itself and lectures. The festival was held in the areas of Palais des Festivals, which hosted the international movie festival in Cannes too. There were huge areas located inside at several floors. The main lectures were held always in the largest cinema halls Lumiere and Debussy. By the most famous names and most attractive parts of the program it was necessary to get ready for relatively large queues. Mostly we got into hall, but a certain time we had to stand in the queue.

The very first was a discussion of probably the most famous vloger Case Neistat with CNN president Jeff Zucker. It was led by Global Marketing Director Lucinda Barlow from Youtube. Casey is for me very inspirational person, who has definitely something to tell young people. I wanted to add here his vlog from Cannes, but he probably did not make any, therefore here is introduced at least one reference of Casey from March of this year.

Scott Galloway is the men I did not know that he exists. Big mistake. He is a professor at the New York University, where he teaches the digital marketing and brand strategy. His lecture with name Winners and Losers in Digital 2017 spoke about a big four of technology companies – Facebook, Google, Apple and Amazon.

He has greatly connected a large quantity of useful data with dynamic, especially jokeful demonstration, what also confirms the picture below. Be sure to find his lectures on YouTube. They are full of great information. For me one of the highlights of the week. 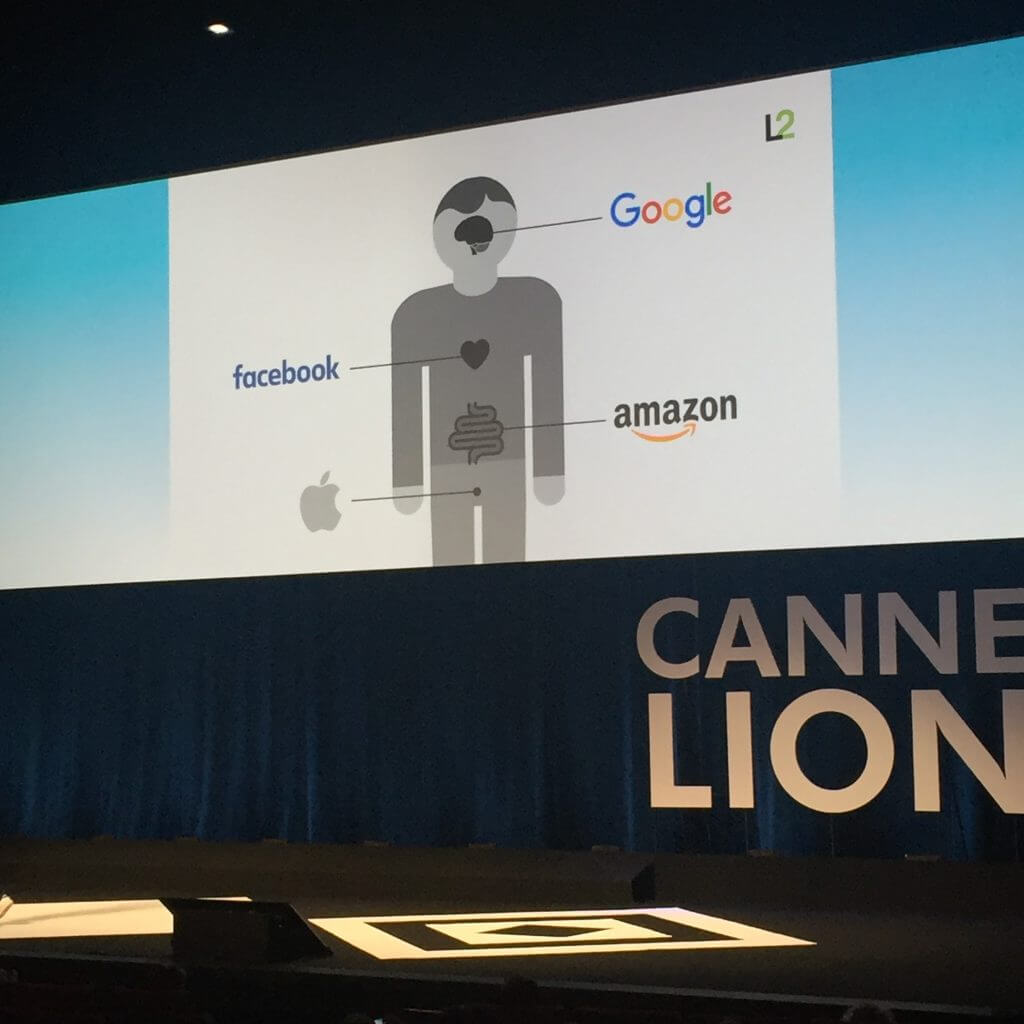 The company Burger King won the Best Marketer 2017 award in this year, so the best marketing client of the year. Their presentation was a combination of great show with their best campaigns and advices how to be the best partner for agency and reach together the best results. I believe that this lecture should see as much companies as possible and I believe that it will appear somewhere on internet. For understanding of this the agency is not a machine where you put money and a creative product drops out “.

The lifetime work could be called the Lion of St. Mark. David Droga, founder of the best independent agency of year Droga5 was awarded by this award. A creative artist, who from Australia through Singapore and London got to New York, where he founded his own agency in 2006.

He won his first lion already as a 19 years old and up to this day he has 191 lions on his account. One man.  Incredible story.

Friday was also the part of program. He was interviewed by Philip Thomas, CEO of the entire festival Cannes Lions. It was the cross section of his career together with demonstration of his works. At the same time it was probably the only lecture, on which was such long queue that organizers „advised“us to watch it only in the hall, where the event in Lumiere was projected, because we would not probably get inside.

It would not be possible to describe all interesting parts of 8-day program. There are tenths and hundreds of different names in all categories, which are connected with creativity. These people are not only from advertisement, but also from foundations, non-profit institutions, brands representatives or sport competitions, such as NFL or NBA, but also celebs of show business (ASAP Rocky, Wyclef Jean, Halle Berry, Steven Gerrard,…). Extremely variable composition, which shows that creativity is the inevitable part of our society.

Beaches and other entertainments

However, Cannes Lions was not only about event in the main palace. Festival was followed by many accompanied events. Parties, discussions, competitions, exhibitions.

For example Instagram had the exhibition, which was changing every day according to topic during the week. From food through the art, cars up to luxury. Suddenly Instagram came back to life… Great! 🙂 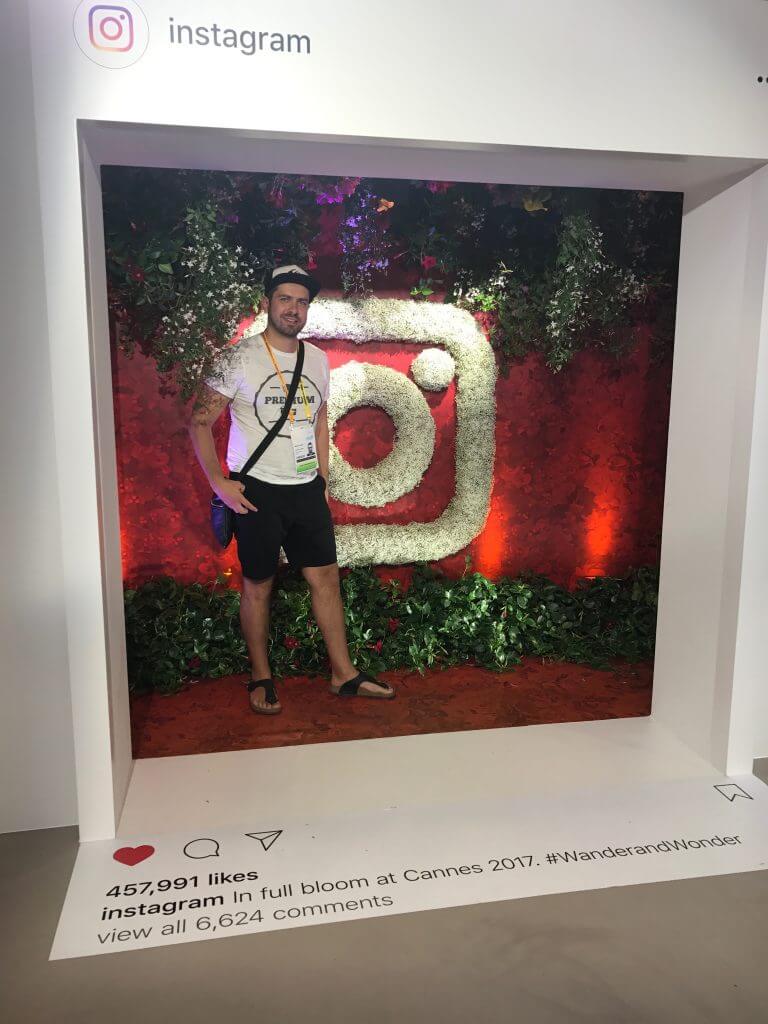 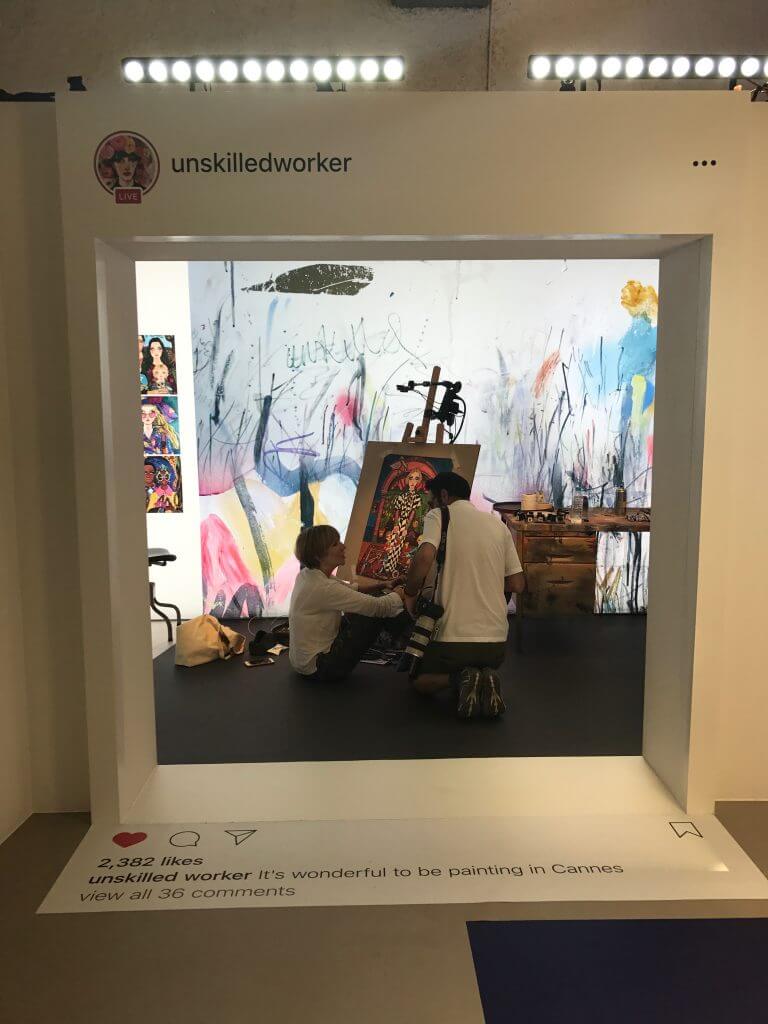 Many companies disposed of its beach, where these companies had their own program and many times cost-free drinks or food. The private parties and public parties were held at evenings. YouTube, Pinterest, Twitter, Oracle, but also Facebook. 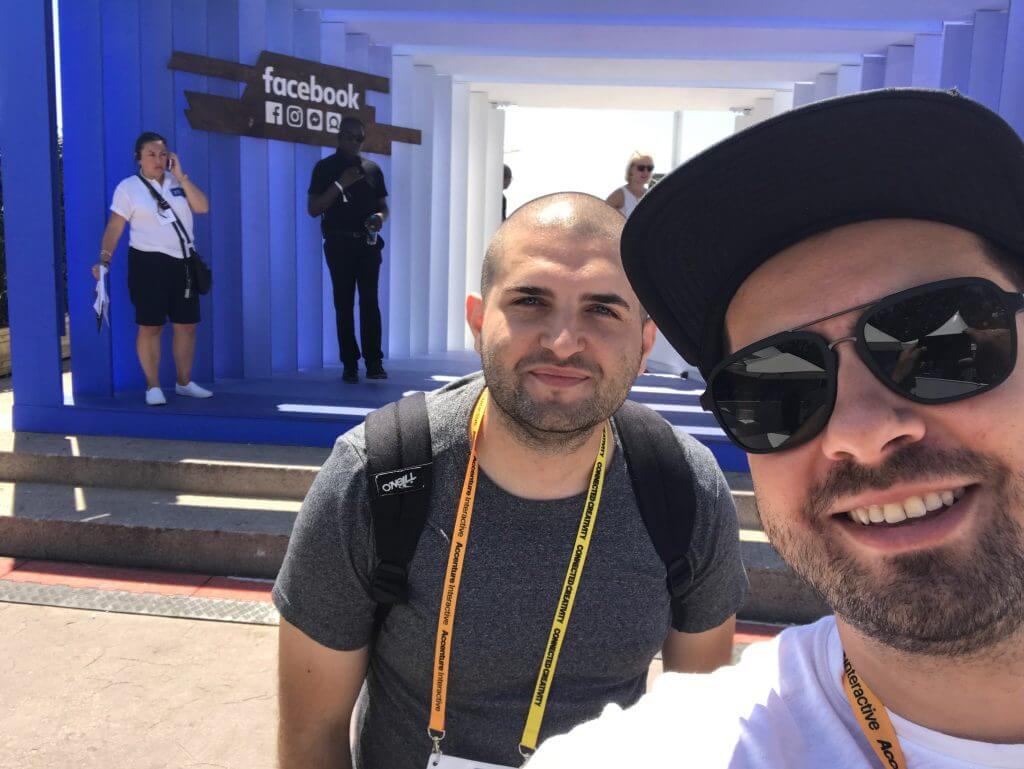 For example Snapchat built own „Snapchat Eye“ directly in front of palace. Free for all and also for public. 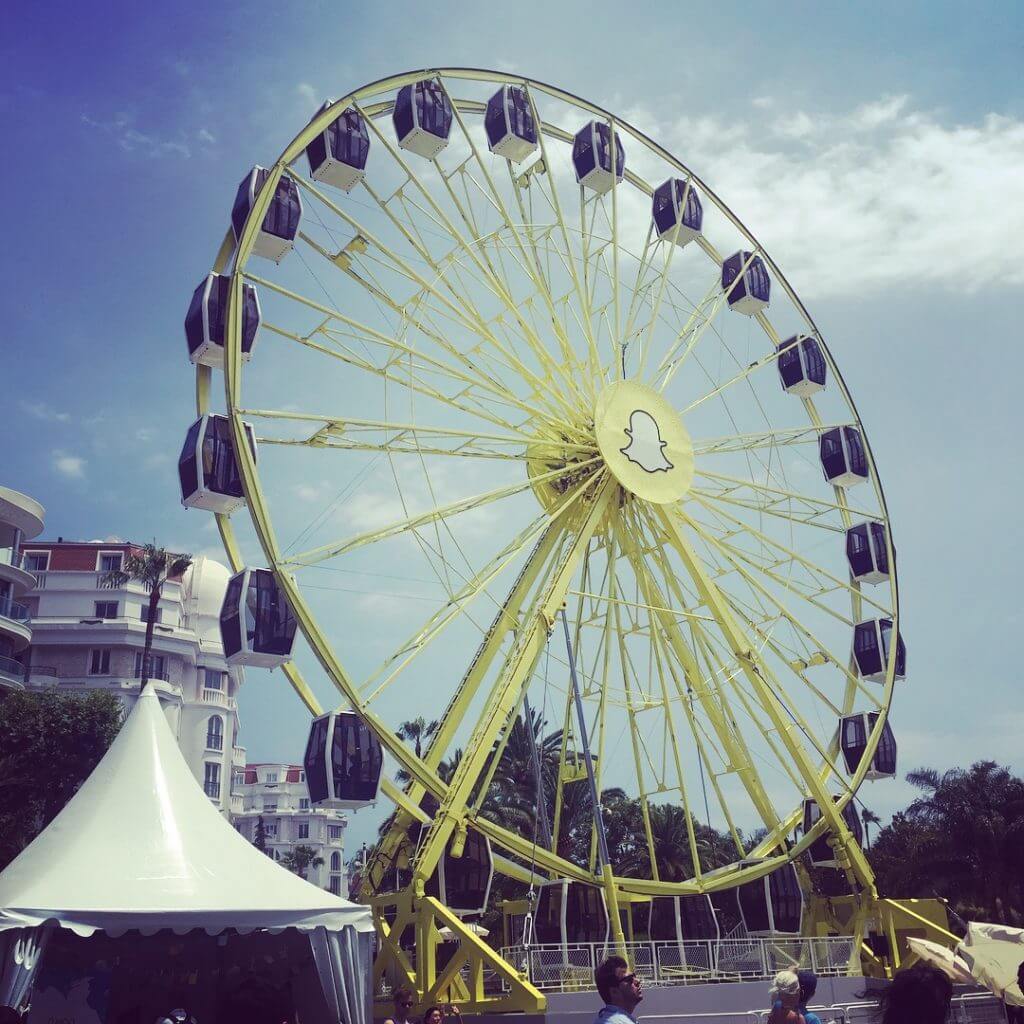 Honestly, it is not easy to combine the excellent lectures with dose of entertainment. However, it is necessary to say that it belongs to more pleasant worries in life. J

Every evening the hall Lumiere in Palais des Festivals with a wonderful red carpet, filled not only with the curious as we were, who wanted to see the best things in the world.  At the first place the nominated and awarded. We saw the great works over the entire week which many times took the breath away. We crossed fingers also to Slovak nominations.

Cannes Lions was for me and I believe, that I say also on behalf of Michael, a very strong experience, which I will remember up to moment till it will be not possible to return there. 🙂 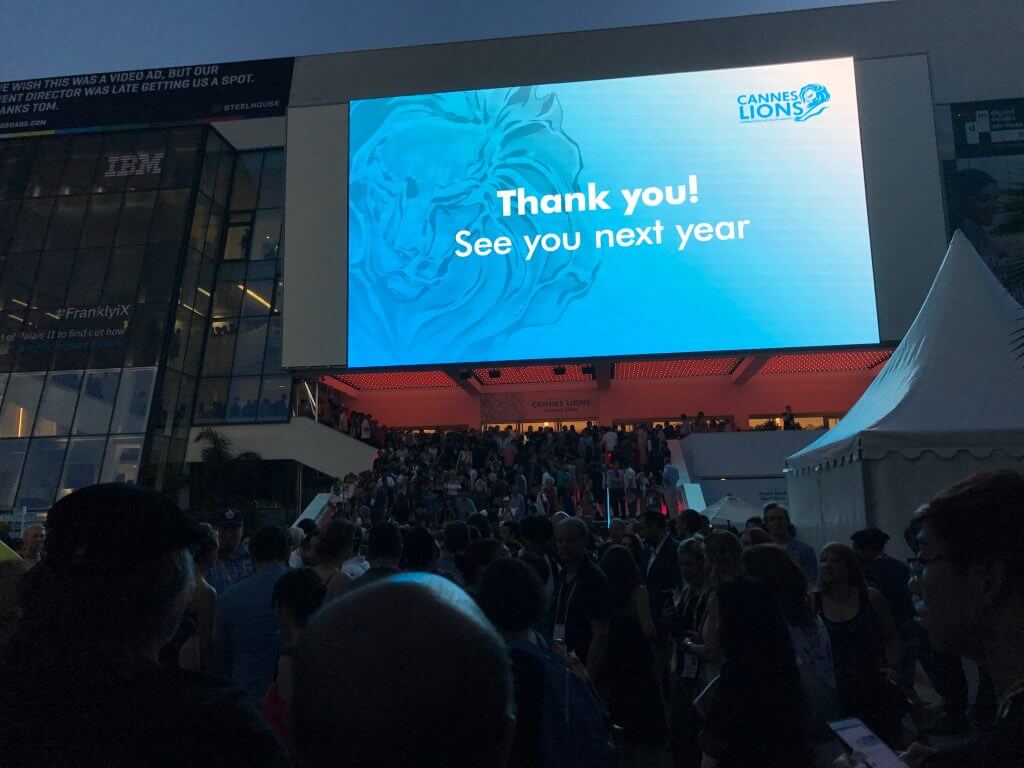 A cookie is a short text that spreads a file of a visited website to a browser. Cookies are important. Without them, browsing the web would be more difficult. Cookies do not in any way provide us with access to your computer or known information that you wish to request from us. It allows websites to remember information about your visit, such as storing your SafeSearch preferences, selecting relevant ads, tracking the number of visitors to a site, making it easier to sign up for new services, and protecting your data. This can make the next page easier and more productive.

Strictly Necessary Cookie should be enabled at all times so that we can save your preferences for cookie settings.

This website uses Google Analytics to collect anonymous information such as the number of visitors to the site, and the most popular pages.